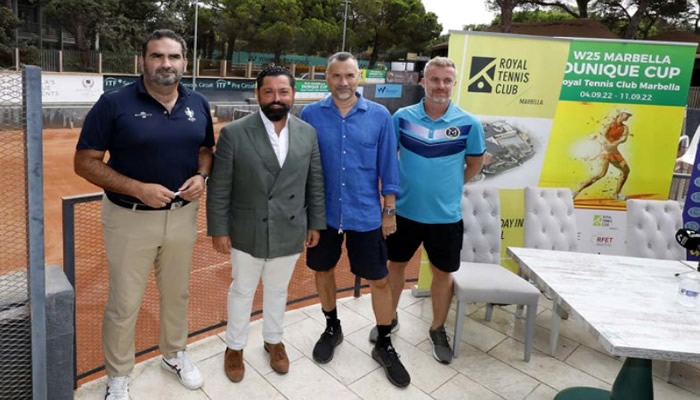 Presentation of the Dunique Cup in Marbella. Credit: [email protected]_Marbella

From September 4 to 11, the Malaga city of Marbella will host the fifth edition of the W25 Marbella Dunique Cup tournament, at the Royal Tennis Club.

As announced today, Friday, September 2, on the Twitter account of Marbella council, the Malaga municipality will host from September 4 to 11, the fifth edition of the W25 Marbella Dunique Cup.

This tournament will bring together 60 players at the Royal Tennis Club, located in Las Chapas. Manuel Cardeñahe, the Councillor for Sports, presented the event today, accompanied by Jose Maria Arrabal, the General Secretary for Sports of the Andalucian government, and Kirill Iline, the organiser of the event and director of the facilities.

Mr Cardeñahe emphasised that: “It has become an annual event of reference within the world tennis circuit”, which has influenced the “historical relationship” of the city with this discipline. He especially thanked the promoters of the competition for their “commitment to women’s sport”.

The tournament – which will consist of a 48-player individual qualifier and a 32-player main draw, as well as a 16-pair doubles draw – is scheduled to include Croatian Tena Lukas, the number 204 in the world. It also includes Spanish players, Aliona Bolsova, Leyre Romero, Angela Fita, and Ana Mintegui del Olmo, the Wimbledon junior champion 2021.

“It is a pleasure to be able to repeat this event for another year to promote Andalucian and women’s sports”, said Iline. He thanked the City Council, the Board, and FC Marbella for their support, which was represented by its coordinator, Alfredo Gil, who reminded everybody that the tournament is endowed with €25,000 in prizes.

Arrabal congratulated the Council for turning Marbella, “into a consolidated brand in the world of sport that does not stop renewing itself, and shining with a proposal as a destination that is difficult to match”. He pointed out that tennis, “is a discipline that we especially value because it is a sport that is bringing a lot of value to our land, and that shows the virtues of Andalucia”.