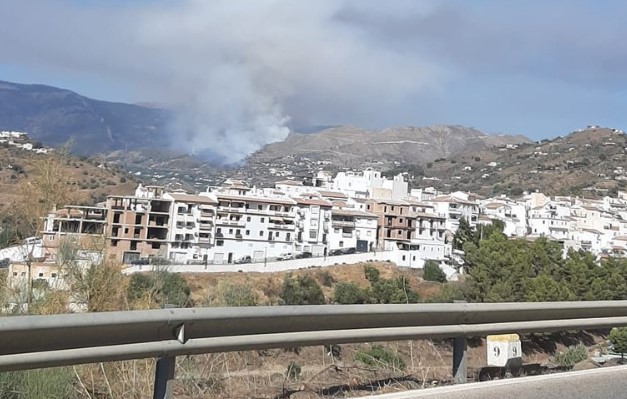 Image of the fire in Malaga province. Credit: [email protected]_INFOCA

As announced by Plan Infoca on its official Twitter account, the fire in Malaga’s Canillas de Albaida has been declared stabilised at 9:15pm. That does not mean the fire has been extinguished but that it no longer possesses a threat.

Firefighting personnel will now continue working to completely eliminate all hotspots of the blaze.

The Guardia Civil and 112 Emergencies Andalucia have both confirmed that seven occupants and four dogs have been evacuated this afternoon, Saturday, September 10, from three properties. This is a result of the blaze in the Canillas de Albaida area of Malaga province.

No injuries have been reported, but the fire is said to be spreading extremely quickly, fed by the strong winds. Plan Infoca personnel, along with the Provincial Fire Brigade Consortium (CPB), are hoping that with nightfall the temperatures will drop, along with the wind, and allow them to bring the fire under control.

A new wildfire was declared just after 4pm in Malaga province by the Plan Infoca this afternoon, Saturday, September 10. This time the fire is in the Los Alamillos area of Canillas de Albaida.

Specialised firefighting teams have been deployed to the incident, where 71 personnel are reported to be involved. Three helicopters are providing aerial support to four fire appliances on the ground. Two operational technicians have also been dispatched, along with an environmental officer.

Fire crews from the Periana, Nerja, and Velez-Malaga stations are part of the Malaga Provincial Fire Brigade team tackling this latest outbreak.

Social media posts show images of the fire burning very close to residential areas. It is believed that three properties have already been evacuated. In the Mosquin area, the flames have already reportedly entered the Sierras Tejeda natural park, as well as Almijara and Alhama.