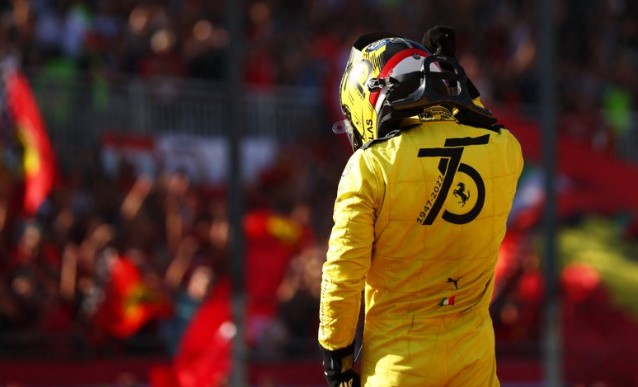 Charles Leclerc clinched another pole position this Saturday, September 10, in the final Q3 session of the Italian Grand Prix in Monza. The Ferrari driver pipped Max Verstappen’s Red Bull by the slimmest margin of just0.145 seconds.

Final positions in the actual session proved worthless for nine of the drivers, all of whom collected grid penalties for various offences. Reigning world champion Verstappen was one, being demoted to seventh place. If he performs like he did last week in Belgium then it will not really matter which position he starts from.

Who wants to see a starting grid? Anyone? 😉

How we're lining up for Sunday's race at Monza 👇#ItalianGP #F1 pic.twitter.com/7AZ7xDhoRS

George Russell saw his Mercedes elevated to second on the grid following the penalties, having originally finished in sixth. Lando Norris will start from third in the McLaren. It was not such good news for Carlos Sainz and Lewis Hamilton though.

After placing third and fifth respectively in the Ferrari and Mercedes, they find themselves down in 18th and 19th, at the rear of the grid for using too many engine parts. Sergio Perez, in the other Red Bull, also dropped down to 13th after originally claiming fourth position.

In front of a fanatical home crowd, LeClerc achieved Ferrari’s first Monza pole since 2019. On that occasion it was also the Frenchman who occupied the front-row spot, going on to beat Lewis Hamilton. The Ferrari driver is currently 109 points adrift of the Verstappen, who would appear to have an unassailable lead.

LeClerc was upbeat about his chances: “It’s amazing. It wasn’t an easy qualifying session. I knew there was quite a bit of potential in the car but I didn’t manage to put everything together, and on the last lap I managed to do it. The car has been feeling great all weekend and I really hope I can finish like in 2019″.

Can @Charles_Leclerc turn a brilliant Saturday into a super Sunday? 🤔#ItalianGP #F1 https://t.co/zDg6WjUGKs

“The lap was pretty decent, just the first sector we seemed to be a little bit slow – a bit of straight-line speed, a bit of not finding the grip. But the rest of the lap felt pretty strong. We chose a higher downforce level than some other cars and the race runs felt good so I am looking forward to the race”, said Verstappen after the session.

Our qualifying lap was good and all in all, I am pretty happy with the weekend so far. Ready for tomorrow’s challenge to make our way forward during the race @redbullracing 👊#KeepPushing #ItalianGP pic.twitter.com/yUHs0Y9XPO

He added: “I just need a clean lap one and clear the cars in front quite quickly and then I think we have a good chance. I am still expecting to get up to Charles, and then it will be a bit of a battle”.

Britain’s George Russell seemed to have already written of his chance of outpacing the Dutchman: “You’d have to be pretty stupid to bet against it. He just has to keep his nose clean in the first few laps and he will cruise to victory. We’ll be trying to finish ahead of Charles. That will be an exciting race”.

“We don’t deserve to be lining up second after today’s performance. It was again a frustrating session because we don’t seem to be able to get the car in that sweet spot. Ultimately, that has been the last season. Lining up P2, we will have a faster race car, probably not fast enough to battle with Max and potentially Charles.”, he explained.

Russell added: “We still don’t have a grasp of why our performance is fluctuating as much as it is but at least we have a fast race car”, as reported by bbc.com.