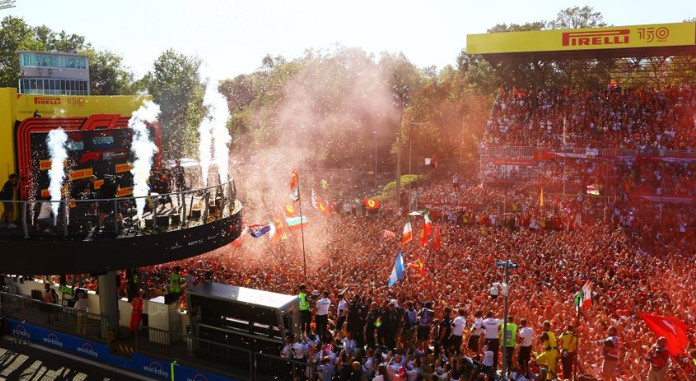 Image of the victory celebrations after the Italian Grand Prix at Monza. Credit: [email protected]

Max Verstappen drove another faultless race today, Sunday, September 11, to take the chequered flag in the Italian Grand Prix at Monza. In the process, Ferrari, and Charles Leclerc, saw their hopes of a victory on home soil sail into the sunset. Speaking of sailing, the Dutchman is cruising to a second consecutive world title after his 11th win this season, and his fifth in a row.

He inflicted defeat on LeClerc, who had started in pole position, while Verstappen began the race down in seventh spot. In reality, the way that the Red Bull driver is performing right now, it really seems to make no difference which position he starts from. Today’s win moved him 116 points clear of the field.

LeClerc clung on to second position, after twice conceding the lead to the flying Dutchman. George Russell took the final spot on the podium with another excellent outing in the Mercedes. Two drivers excelled by placing fourth and fifth. Carlos Sainz and Lewis Hamilton had started their Ferrari and Mercedes respectively, from the rear of the grid, after incurring penalties.

This year’s title has looked to be a one-horse race for some time, with Verstappen and the Red Bull simply unbeatable. After only five laps he had already shot through the field to go second behind Le Clerc.

We nailed it 👌🇮🇹

We had an amazing start and I was able to quickly get in my rhythm. The car was absolutely flying and really enjoyable to drive all weekend, great work once again team! pic.twitter.com/vx7oTVKRFH

5 wins in a row now, which is a fantastic performance by everyone @redbullracing, let’s keep this going 💪 pic.twitter.com/aIcv7EsqAc

The finish of today’s race was something of an anti-climax. A Virtual Safety Car was deployed with five laps remaining. Daniel Ricciardo’s McLaren pulled up at the Lesmo corners after suffering engine failure. Before the race could be resumed, the officials ran out of time and Verstappen took the chequered flag while under the VSC.

After the race, Ferrari boss Mattia Binotto refuted accusations that his team had again miscalculated its strategy. In response, he admitted that it would have made no difference either way as Verstappen was too fast for them.

Social media has been busy with many users asking why the race finished under the VSC, ruining it for the spectators. The question was raised as to why the race could not have been possibly restarted with a sprint finish.