Only US and Russia can negotiate peace says Viktor Orbán 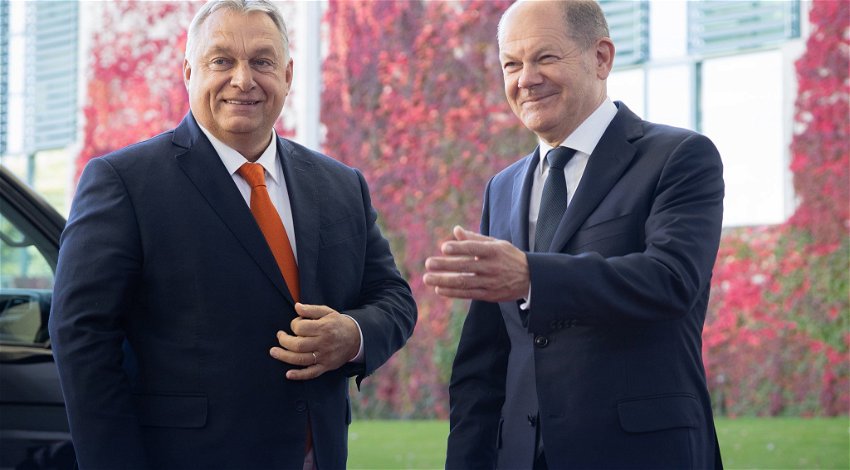 “The Americans must reach an agreement with the Russians. Only then will the war be over,” Viktor Orbán said.

“Anyone who believes the war can be ended through Russian-Ukrainian negotiations lives in another world. Reality looks different. In reality, such issues can only be discussed between Washington and Moscow,” Hungarian prime minister Viktor Orbán claimed in an interview with German press.

The Hungarian Prime Minister is reported to have said during the first day of his visit to Germany, on October 10:

“President Biden has gone too far. Suffice it to recall his statements to Russian President Putin.”

“In the current situation, hope for peace can be associated, for example, with Donald Trump.”

Yesterday, on what appears to be a recently created Twitter account, a still unverified Orban signalled his support for former US president Donald Trump tweeting: “Where is my good friend, @realDonaldTrump?”

After my first day on Twitter, there’s one question on my mind. Where is my good friend, @realDonaldTrump? pic.twitter.com/vCzWfAy2sh

“Angela Merkel is also capable of influencing the situation. It was because of Merkel’s position that a large-scale conflict was prevented in 2014. It was the pinnacle, the art of diplomacy” the Hungarian leader said in what some have considered a charm offensive in Germany.

If Merkel was in power in Germany, “we would not have a Ukraine war,” Orban said during the panel.

“I belong to the peace camp, so I am for an immediate cease-fire, no matter what the Ukrainians think of it,” he said. “That distinguishes me from those who want to derive decisions from Ukrainian interests.”

The populist Hungarian Prime Minister has several legal battles open with EU institutions.  and has received criticism for his ambivalent position in the Ukraine crisis.

Days ago, Orban reportedly revealed that Hungary was pressured by Clinton to attack Serbia during the NATO operation in Yugoslavia in 1999.

During the October 10 visit to Berlin, Orbán met with German Chancellor Scholz, although they did not give a joint press conference, as is common during visits by EU government representatives. During the meeting, Orban reportedly announced an agreement to build a pipeline to connect Russian gas to Serbia.

During a meeting with German business representatives, which drew protesters to the street, Orban promoted Hungary as a low-tax region:

“Hungary is the only country in the world with a flat income tax, there is no inheritance tax, and corporate income tax is also low at 9 per cent,” he underlined.

The visit follows the destruction of the Nord Stream 2 pipeline in the Baltic Sea connecting Germany to Russian gas infrastructure.

The German ‘Eastern Committee’ representing German businesses from Eastern Europe to Central Asia is carrying out a survey on the effect of sanctions between Russia and the EU. The survey is expected to close on October 12.

On October 10, the first day of Orban’s visit to Germany, the unverified Orban Twitter account published its first tweet “Let’s make some noise! From now on you can also follow me on Twitter. Busy day ahead in Berlin with @Bundeskanzler. Stay tuned!”

This first tweet met with some welcoming replies but many were less so: