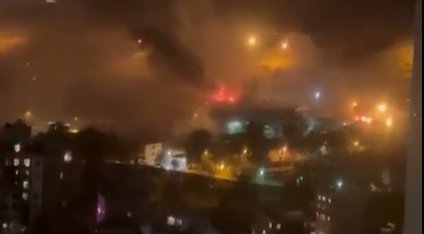 Iranian protests have continued to spread in defiance of a government crackdown, with the government using heavy-handed tactics to try and bring the situation under control.

But reports on Saturday, October 15 suggest that the protests are showing no signs of abating, but rather that they are spreading with strikes shutting shops and businesses.

Demonstrations that began in protest over the death of 22-year-old Mahsa Aminii in police detention, have quickly morphed into an attempt to being the hard-line Islamic government down.

The Iranian government has quickly squashed protests in the past, however, they have not been able to do so this time although there is no sign as yet the government will be toppled.

Much of the anger is being directed at clerics who are behind the strict dress codes for women.

The unrest also appears to have moved to Tehran’s Evin prison where political prisoners are held.

Videos on social media show smoke rising from the facility, as well as shots and alarms.

Some of those videos show Special Forces being sent to the prison, suggesting an uprising of sorts. However, with no way of immediately verifying reports and the Iranian government remaining tight-lipped over security issues, it is difficult to know what is happening.

Witnesses have told Reuters: “Families of prisoners have gathered in front of the main door of Evin prison.

“I can see fire and smoke. Lots of Special Forces. Ambulances are here too.”

While Iranians are worried about Evin prison and political prisoners, Naziabad neighborhood continues its anti-regime protests: "Death to Khamenei" is echoed.
After Evin news broke out, internet was shut down across the capital, again!#مهسا_امینی#IranTruth pic.twitter.com/Num1hEZWYM

According to the latest reports from Human Rights Watch in Iran, more than 7,000 people have now been detained and more than 230 have lost their lives. This includes more than 32 youngsters and 26 members of the security forces.

Supreme Leader Ayatollah Ali Khamenei has warned that no one should think they can bring down the Islamic Republic, but those warnings have done little to stem the tide of protests.

Many of those protesting are calling for the death of Islamic religious leadership, accusing the government of crimes against humanity and of corruption.

With Iranian protests continuing to spread the EU is expected to implement further sanctions against key individuals on Monday. Whether they will have any impact on the situation remains to be seen.