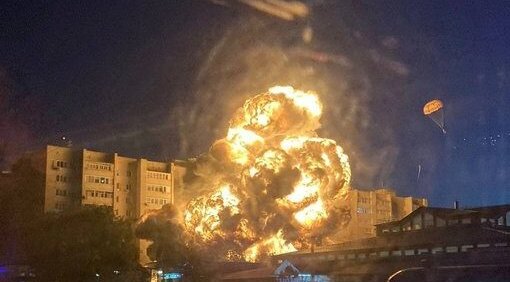 According to the pilots of the plane, an engine burst into flames on takeoff forcing it to crash into the residential block.

They furthermore say they were headed to the frontline according to news site Noticias, with the plane carrying ammunition.

Vladimir Putin has apparently offered his condolences and 1 million roubles (€16,300) to the families of those who died. He has also sent the ministers of emergencies and health to the scene to assist the injured and the emergency services.

For decades, Soviet/Russian AirForce constructed and kept the myth of noble pilots who prefer to die but prevent a crash of a warplane on a residential area (compare “Rumlose Helden” by Gesine Dornblüth). The today’s crash in Yeisk proves this myth wrong. pic.twitter.com/qHobWSBkTK

19:40 (October 17) – The TASS news agency has reported that tw0 people died and at least 15 were injured in the plane crash.

According to their latest update around 100 people were evacuated from the building.

It is not known whether the number of beds is an indication of the extent of injuries or whether this was purely a state of readiness by the hospital to take in casualties.

18:52 (October 17) – A Russian SU-34 military plane on a training mission has crashed into an apartment block according to state media company TASS.

The accident is said to have occurred at 18:20 local time on Monday, October 17.

According to TASS an area of about 2,000 square metres is on fire with all five stories of the block damaged. In total 17 apartments are said to be affected, however, no information has been provided with regard to casualties.

The Ministry of Emergency Situations, Kondratyev, issued a statement saying: “According to preliminary information from the operational services, a Su-34 military plane crashed. As a result, a fire broke out in a nine-story building. The fire engulfed several floors at once. Previously, 17 apartments were damaged.

“At 18: 20, a fire was reported in a 9-storey residential building. Emergency response services were sent to the site. At 18:27, fire rank # 3 was announced. There was a fire from the 1st to the fifth floors of a residential building. The fire area is 2,000 square meters. m. Information about the dead and injured is being clarified.”

A source told TASS that the residents of the building had been evacuated to a temporary camp, but no further details were provided or reported.

The Head of the district, Roman Bublik, said in his Telegram channel:  “In the city of Yeysk, an emergency occurred – a nine-story building is on fire.

The Ministry of Defence reported that the plane was climbing after take-off when it fell to the ground, with the cause listed as the ignition of one of the engines. The plane was said to be carrying a significant amount of fuel when it crashed causing extensive damage to the building.

The pilots of the Russian SU-34 plane on a training mission ejected before the crash and are said to be safe.