Ukraine thanks Spain for continued support from Spanish military 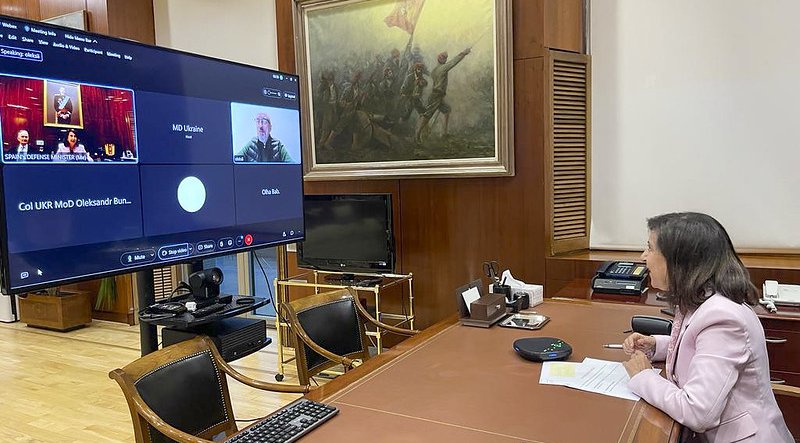 Speaking at a new videoconference meeting between the two on Thursday, October 27, Reznikov and Robles discussed the current situation in Ukraine and various aspects of the Spanish military support provided to the war-torn country since the beginning of the Russian invasion.

Spain’s Robles gave an update on current shipments of material and equipment and detailed the forecasts for future deliveries over the coming weeks.

She said that Spain would maintain “all the necessary effort, as it has been doing throughout these eight months of war” and revealed that Spain “feel very proud of the courage of the Ukrainian people and armed forces.”

Reznikov shared his gratitude to Spain for its support over the past eight months.

He added that he “greatly appreciated the speed of Spain’s reaction to the new needs that have arisen on the ground.”

He referenced Ukraine’s “need for anti-aircraft launchers and electrical generators.”

He said that Spain was “the first country to respond.”

Reznikov also expressed his gratitude for the “systematic and continuous nature of Spanish military aid.”

He said that Ukraine valued the variety of “support in terms of armaments, ammunition and equipment, and the speed of deliveries.”

Both ministers discussed the training activities Spain has offered to Ukrainian military personnel, which will be carried out from November onwards in Spain, coordinated by the Training and Doctrine Command and the Land Force.

This will be carried out both bilaterally and within the framework of the recently approved European Union Assistance Mission to Ukraine (EUMAM), the Spanish Ministry of Defence said.

Reznikov and Robles said that they would “maintain a permanently open line of communication, both bilaterally and within the Contact Group.”