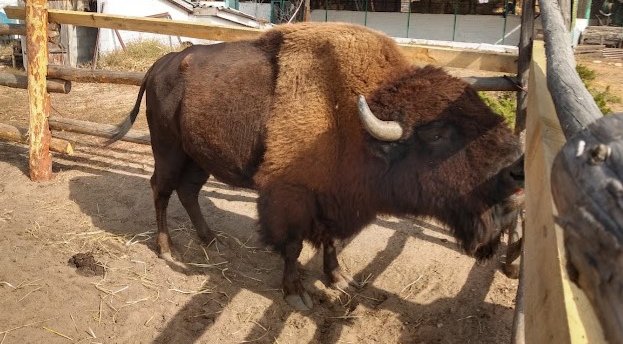 Vladimir Putin’s starving front-line soldiers are believed to have eaten several animals from a zoo, including bison, kangaroo and ostriches.

According to reports from local residents of the recently liberated village of Yampil in Ukraine, starving Russian soldiers on the front lines were forced to devour animals abandoned in a zoo in order to stay alive. The village is located in the Lyman area of the Donetsk region.

Ukrainian troops expelled Vladimir Putin’s invading forces from the area on September 30, and on October 10, volunteer workers from the “VETMARKET Pluriton” rescue and assistance team for animals moved in. They soon started to discover pieces of flesh and bones belonging to the dead bodies of animals from the local petting zoo.

Among the creatures thought to have been eaten by the besieged military personnel were ostriches, several donkeys, a kangaroo, and even a bison. Inside the zoo itself, the workers found a pack of dead wolves, two camels, numerous piglets, and various species of birds.

Gruesome images of the dead remains were collected, too graphic to display here. “Many animals were eaten by orcs (Russians)”, one volunteer named Vitaly told Eastern Option, “Locals said they ate kangaroos, we haven’t found the bones yet because there are so many of them, they are scattered all over the zoo”, he explained.

“There was a bison, it was running around the village, and then it was killed and eaten. Several donkeys, the ostriches were eaten. Some also escaped, and the ponies are now running around the territory, we are evacuating them”, added Vitaly.

“The situation with the wolves is terrible. People say that they were tame. They died holding their empty bowl in their paws, in closed enclosures. We found only skeletons. They were closed and tightened with nets, we had to break the lock”, Vitaly detailed.

Miraculously, a bear was rescued unscathed from a private zoo in the same village. The caged beast was christened ‘Yampil’ after the place in which he was found.

Materials are being collected by the Ukrainian animal protection initiative “UAnimals”, in order to contact law enforcement agencies regarding crimes against animals. The “VETMARKET Pluriton” team is engaged in publicising the tragedy.

Not all the creatures were killed, with some found roaming free. It will never be known whether the Russians maybe actually released the animals to set them free. It is pretty certain from the images that they killed some of them. Evacuated animals were taken to a facility in the city of Dnipro, where they are being cared for.