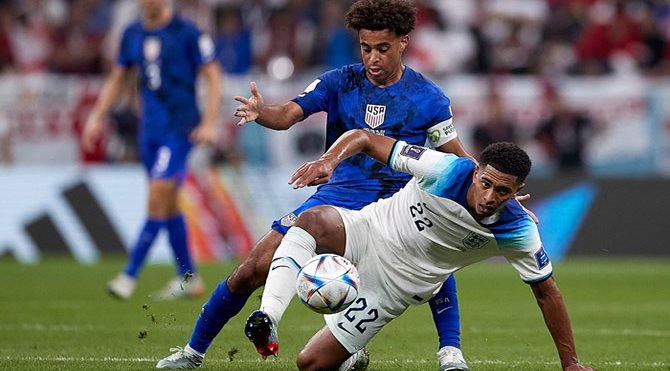 England could not find a way to break down the USA in their Group B World Cup clash in the Al Bayt stadium in Qatar.

England faced their second match in Group B this evening, Friday, November 25. Their opponents in the Al Bayt Stadium were the USA who would be eager to build on the one point they picked up against Wales in the first match.

The Welsh lost 2-0 to Iran earlier today to more or less end their hopes of progressing in the tournament. Iran’s result placed more pressure on the Americans to get a positive result.

Gareth Southgate announced an uncharged side, meaning that captain Harry Kane had shaken off the foot injury he picked up in the last game.

England found themselves in a very different type of match in comparison to the Iran contest. The USA midfield found themselves gaining the upper hand with Weston McKennie spurning a golden chance. Chelsea star Christian Pulisic also rattled the crossbar towards the end of the first half.

The introduction of Jack Grealish and Jordan Henderson midway through the second half brought a spark to England’s play. Marcus Rashford entered the fray shortly after as well, but, it really looked as though this team was never going to score.

One has to wonder why with Harry Kane clearly making zero impact up front why Southgate couldn’t risk bringing Phil Foden into play.

In the end, a very lacklustre display sees England needing at least a draw from the final group match with Wales to secure a place in the last 16. With the Welsh needing a win, that game is going to be very interesting for sure.

It finishes all square between England and USA. One point apiece to keep things close in Group D.@adidasfootball | #FIFAWorldCup