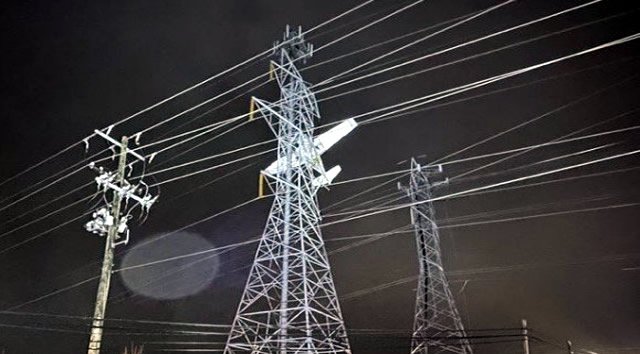 Image of the small plane hanging from an electricity pylon in Gaithersburg, Maryland. Credit: [email protected]

Two passengers were trapped inside a small plane after it crashed into high-voltage power cables in the city of Gaithersburg in Maryland.

More than 86,000 residents are currently without power in Gaithersburg, Maryland, after a small plane crashed into an electricity pylon. It was subsequently left hanging from the high-voltage overhead powerlines with its two passengers trapped inside.

As tweeted by Pete Piringer @mcfrsPIO, the Chief Spokesperson for Montgomery County (MD) Fire & Rescue Service, dozens of emergency crews were immediately deployed to the location. The plane and its passengers are suspended some 100ft above the ground near the intersection of Rothbury Drive & Goshen Road.

The power supply was subsequently cut to surrounding areas as a result of the impact. According to Piringer, the pylon still has an active power supply going to it which could hinder any rescue attempt.

Emergency teams are in the process of attempting to rescue the two stricken people. They are believed to have not been injured in the incident. At the time of the crash, the plane was heading to make a landing at Montgomery Airpark, which was later reportedly closed to air traffic.

Due to a power outage, the traffic lights are out in the intersection of Sam Eig Highway and Fields Road. The power is also out in surrounding neighborhoods such as Crown and Rio. There is no estimate of restoration of power. pic.twitter.com/SXHo50nm0x