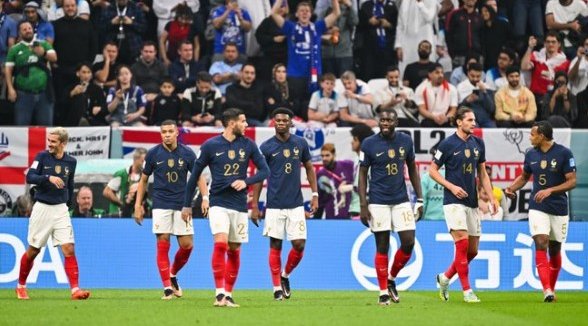 France will play Morocco in the World Cup semi-final after England lose to France.

England and France contested the fourth quarter-final of the 2022 Qatar World Cup this evening, Saturday, December 9. The prize for the victors was a semi-final clash with Morocco who stunned Portugal 1-0 earlier today.

Didier Deschamps named an unchanged side for the game after Sunday’s last-16 win over Poland. Gareth Southgate also kept the same lineup that disposed of Senegal in the previous game.

Aurelien Tchouameni put France in front after 17 minutes. He found himself in space and picked out the bottom corner of the England net with a vicious shot, beyond Jordan Pickford.

Dayot Upamecano took Harry Kane out in the 26th minute but incredibly, the penalty was not given. Atletico Madrid’s Antoine Griezmann was totally in control of the midfield for France at this point.

In the 52nd minute, there was no disputing the penalty this time. Aurelien Tchouameni turned from hero to villain as he took Bukayo Saka out with a very clumsy challenge on the Arsenal Winger.

Harry Kane stepped up to face his Tottenham teammate Hugo Lloris and smashed the penalty kick past him to level the scores. Kane’s strike draws him level with Wayne Rooney as the all-time leading goalscorer for the country.

Ousmane Dembele missed a golden opportunity in the 69th minute, but after 78 minutes France had the lead again. Olivier Giroud was on hand to convert a fine pass from Antoine Griezmann, giving Pickford no chance.

A big moment arose in the 81st minute when Theo Hernandez looked to have bundled Mason Mount to the floor. The referee waved away the England appeals for a penalty but then went to check the VAR. Kane had the chance to become the outright top scorer for England but somehow lofted his resulting kick over the bar. France held out for the huge win and will now face Morocco in the semi-final.