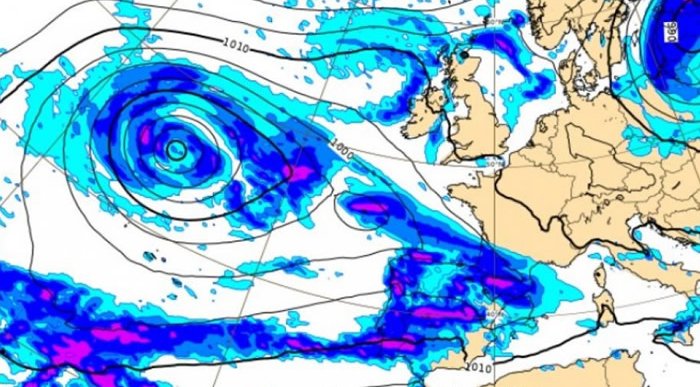 ‘Storm Efrain’ will arrive in Spain bringing an ‘atmospheric river’ with it according to AEMET, the State Meteorological Agency.

AEMET, the State Meteorological Agency has warned that as one front disappears, another one in the form of  ‘Storm Efrain’ is approaching. This weather phenomenon is already forming over the Atlantic and will arrive in Spain on Tuesday, December 13, as an ‘atmospheric river’.

As explained by the weather experts, atmospheric rivers: “are relatively narrow regions in the atmosphere that are responsible for most of the horizontal transportation of water vapour outside the tropics”.

They point out that those rivers containing the largest amounts of water vapour and the strongest winds can create extreme rainfall and flooding, sometimes even catastrophic damage. However, most of these atmospheric rivers are usually weak and only “provide beneficial and crucial rain or snow for the water supply”.

Cloudy skies will predominate over almost the entire Spanish mainland, the Balearic Islands and the Canary Islands on Monday morning. Widespread rainfall will persist throughout the day, moving from the northwest to the southeast.

The strongest and most persistent rainfall will occur in Galicia and the west of the Central system. It will be less likely and intense in the Mediterranean area and in the Balearic archipelago. Snow levels will be between 1,600-1-800m in the Cantabrian mountain range, and 700-900m in the Pyrenees.

Tuesday will see worse weather coming as a new and even more active front arrives on the Peninsula, affecting mainly the southwest and central areas.

The rain will continue on Wednesday, especially in western Galicia, the Central system, and western Andalucia, around the Strait. This pattern is likely to be weaker in the Balearic Islands and the eastern third of the peninsula, especially in the extreme southeast.

On Thursday 14  and Friday 15 the weather marked by instability will continue on the mainland and the Balearic Islands forecasts AEMET.

Looking ahead to next weekend, the weather forecasts are marked by greater uncertainty. It is expected though that from Friday 16, a third storm will approach the west of the country giving rise to a new episode of rain.

This rain should be generally weak in the northern third of the peninsula and in the Balearic Islands. It is not ruled out though that isolated showers could occur in the rest of the mainland, with the possibility of snow in the main mountainous systems of the northern half.