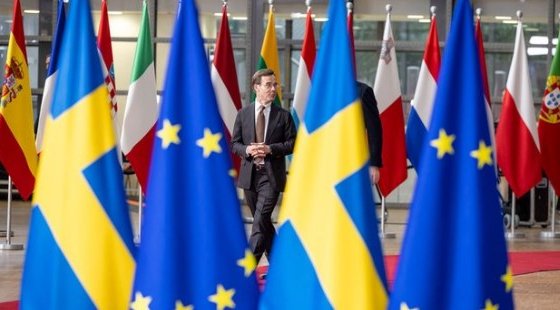 Sweden has replaced the Czech Republic as President of the European Union with security issues high on its agenda.

As of today, Sunday, January 1, Sweden takes over the six-month presidency of the European Union from the Czech Republic. Swedish ministers and officials will subsequently lead negotiations on more than 300 issues during approximately 2,000 meetings, mainly in Brussels and Luxembourg.

The Nordic country will have the difficult task of finding compromises among EU countries and generating consensus in the European institutions on controversial issues such as energy, sanctions against Russia, and migration policy, as reported by larazon.es.

One of Sweden’s priorities at the helm of the EU is reported to be the issue of migration. This is a topic that continually creates tension between countries in the bloc. This may also be the case during the Swedish EU presidency this spring. The Netherlands and Austria have already pushed for an extraordinary summit in February, which will be dedicated to migration issues.

After the last EU summit, Swedish Prime Minister Ulf Kristersson commented: “They are now experiencing waves of migration that are approaching what we saw in 2015. For them, this is an urgent problem and they are now demanding that Europe acts”.

During the Swedish presidency, work will continue on a series of legislative proposals that lay the groundwork for a new EU migration system. But urgent refugee problems may need to be resolved in the spring.

Climate looks like being one of the most difficult challenges for Sweden to solve, including the large ‘Fit for 55’ climate package. This package contains several measures aimed at helping the EU reach the target of 55 per cent lower emissions by 2030. “The EU leads globally on climate work and Sweden wants to reinforce that view”,  Kristersson said.

EU states have yet to agree on multiple energy and transport issues, including energy efficiency, energy taxation, renewable energy sources, and new rules for aviation fuel.

Sweden’s Climate and Environment Minister, Romina Pourmokhtari, will have to deal with the sensitive issue of restoring natural areas. The Scandinavian nation has a number of critical views and worries about the consequences of measures to restore forests and land.

This is especially looking like becoming a problem for the minister when it inolves everything from forestry and mining to the planning of parks and military training camps.

At the last summit in December, EU leaders spent hours discussing the EU’s deteriorating competitiveness and the large US aid package to mitigate the effects of inflation. The package contains major investments in the green transition, which are certainly welcomed by EU countries, but at the same time made Europe worry that the subsidies will give US companies a competitive advantage.

As usual, Member States have different views on how to solve competition problems. Some call for state support and move in a protectionist direction. Other more free-trade-oriented countries, such as Sweden, are more hesitant about such solutions. In January, the EU Commission will present an analysis of how to proceed.

The war in Ukraine is likely to leave the most significant mark on the Swedish EU presidency, which will hand over to Spain on July 1. EU countries may have to agree on new support packages for Ukraine and new sanctions against Russia.

So far, EU countries have managed to stick together. However, the relationship is becoming increasingly strained with each new package of sanctions against Russia. The Ukrainian conflict has caused energy problems to worsen in the EU.

The internal and external security of the European Union will be one of the central priorities of the rotating presidency that Sweden will take over on 1 January, Kristersson stressed. Speaking during an appearance in the Swedish parliament, the Prime Minister said: “Our primary task will be to help ensure Europe’s security”.

Kristersson acknowledged that the war in Ukraine will mark the six months of the Swedish presidency and stressed that he is prepared: “to be able to act quickly and decisively”. He called for European ‘unity’ and the need to safeguard the ‘common’ interest.