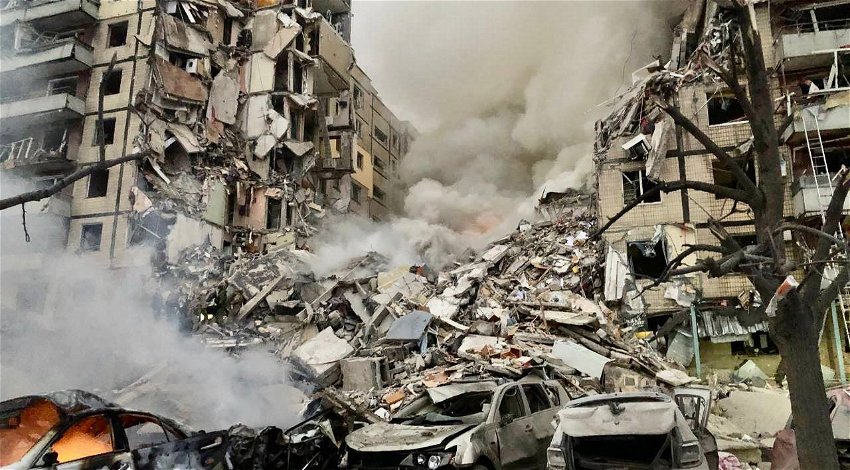 13:32 (January 17) – The adviser to the Ukraine government who said that its aerial defence system was responsible for the Russian missile destroying a residential block, has resigned.

Arestovych was heavily criticised after he said that Russia was not responsible for the bombing that killed 44 and injured 79 residents, 16 of which were children. His statements allowed Russia to distance itself from the incident and to lay blame with Ukrainian officials.

The Defence of Ukraine said on Tuesday that they had rescued 39 people, including six children, from the ruins of the building.

The Russian state news agency TASS said on Monday, January 16 that Peskov maintained that Ukraine´s air defence system was to blame. He said that Ukraine was to blame for shooting down their missiles, thaT it was hit by an air defence counter-missile or was a result of one.

Peskov went on to claim: “The Russian armed forces do not strike at residential buildings or at social infrastructure.”

He said strikes are only aimed at military targets, disguised or obvious, adding: “You yourself have seen the conclusions of some representatives of the [Ukrainian] side, where it was said that this tragedy [in Dnepropetrovsk] was the result of air defence counter-missiles.”

The adviser to the head of the office of the President of Ukraine Oleksiy Arestovich had said earlier that part of the house in Dnepropetrovsk collapsed due to the fall of a missile shot down by Ukrainian air defences.

Arestovich, the #Ukrainian advisor to #Zelensky declared that the destruction of a residential building in #Dnepropetrovsk was the result of the #UkrainianArmy intercepting a #Russian cruise missile while working on a populated area.#Ukraine #UkraineWar #UkraineRussianWar pic.twitter.com/PMyxQiMnzm

There has, however, been no confirmation from Ukraine authorities that this is the case. Moreover, the evidence that Russia has targeted civilian facilities and infrastructure is well documented.

International condemnation of the attack continued on Monday with governments across the world pointing the finger at Russia for the bombing of the residential building, whether directly or indirectly having started the war.