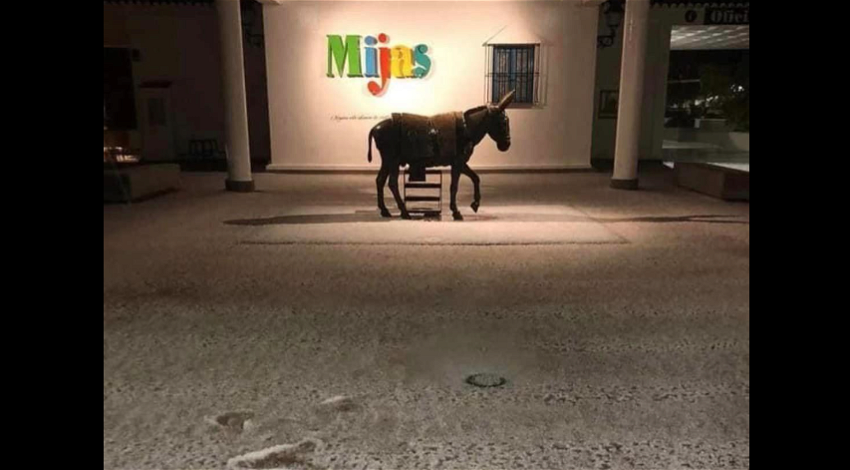 PICTURES and videos of the blanketed white streets of Malaga’s Mijas as a result of hailstones flooded social media after a yellow warning was issued for several parts of Andalucia on Wednesday 25.

Residents of Mijas posted videos and pictures of a freak hailstorm that left streets, houses and cars covered in snow in the Province of Malaga municipality.

One resident shared that it hadn’t snowed in Mijas “since January 2017.”

Facebook user Clarice Williams added: “If you’re wondering why it’s been 8 degrees celsius the last couple of days, then just take a look at these photos from Mijas.

“It would be lovely to have some snow on the ground and on the Sierra Bermeja,” she wrote.

Sarah Reeves shared a video alongside the caption: “WE HAVE SNOW !!!! HAHAHAAH, 22 degrees last week in our t-shirts while walking down the coast and now I’m picking snow from inside my 10 layers!”

Pictures shared from the Sierra de Mijas on the morning of January 25 by Mijas International’s Miguel Angel Campos, showed the depth of the snow in the area.

According to the weather forecast, there is a high probability of snow in the Sierra de Mijas on Wednesday, January 25.

Weather experts suggested that this has been the worst cold wave in the region since 2008.

Resident Sue Mccleary shared a picture of her pup’s paw prints in the snow.

“They weren’t impressed and weren’t out long.”

Brits in Andalucia’s Mijas are being urged to help fellow residents – if they are in the position to – as many may be struggling during the cold conditions in the region this month.