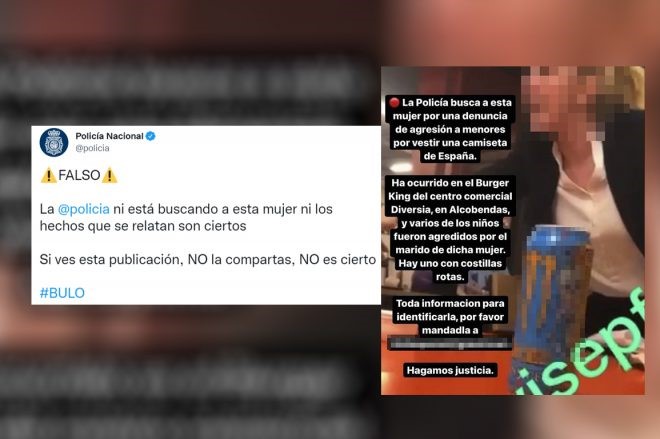 The far right hoax that alleged an a group of youths were attacked by a woman for simply wearing a Spain shirt has been dealt with by the police, who are playing an increasingly active role in deal with misinformation and conspiracy theories.

According to the police most of the misinformation emanates from the same sources, with media that specialises in denying this type of information usually ending up having discovered it. Sadly by that stage the damage has already been done.

The latest example dealt with by the police originated from the far right who released the image of a woman who they alleged had assaulted some minors for wearing the Spain shirt. The image and the story began circulating on social networks before the security forces were able to confirm the story as untrue.

Police say that the writer of the hoax was very creative and would’ve made a great writer of soaps, with full details of the location of the attack, the injuries sustained, who the guilty party was etc.

That level of detail they say, makes it very believable. However they warn that you have to be careful what you read and from which sources. It is important they say to check the sources before you share or print, as you may end up collaborating with the hoaxer even though that was not your intention.

In this case those involved were happy to see the police deny the hoax as they were there dealing with the persons concerned. It is understood that the identity of the person is known and that they are well known for spreading far-right hoax messages such as the one that alleged the attack for wearing a Spain shirt.