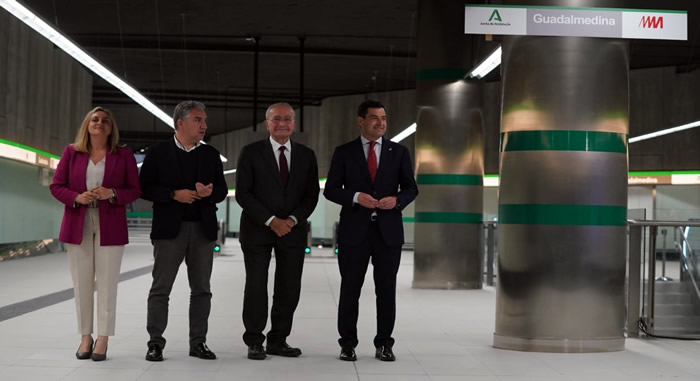 Juanma Moreno, president of the Andalucian government, this Friday, April 22, inaugurated the Guadalmedina Metro station in Malaga city. It becomes the closest stop to El Corte Ingles, and should be open to passengers by August or September. “We would love it if it were full of people for the Malaga Fair”, he assured.

During a presentation ceremony, Mr Moreno invited the companies involved in the works, as well as the residents’ associations affected by the works. He was accompanied by Elias Bendodo, the Minister of the Presidency; Marifran Carazo, the Minister of Public Works, and Francisco de la Torre, the mayor of Malaga, along with various members of the City Council.

He reiterated that the Metro has been completed, except for the safety tests, which depend on the Railway Safety Agency and for which he cannot shorten the deadlines. Three things need to be finalised he explained: the completion of safety tests, the museumisation of the archaeological remains that can be visited for free at this same station, and, most importantly, the arrival of passengers.

Only one of these three things could delay the opening beyond the date on which the underground starts up he added. That is the exhibition of the archaeological remains, which will be tendered “in the next few days”.

Guadalmedina Metro station is the largest in Andalucia. “When I showed photos they asked me if it was a station in Madrid or Barcelona”, Moreno exclaimed proudly. It covers 28,000m², with three different entrances: Callejones del Perchel, Avenida de la Aurora, and Armengual de la Mota.