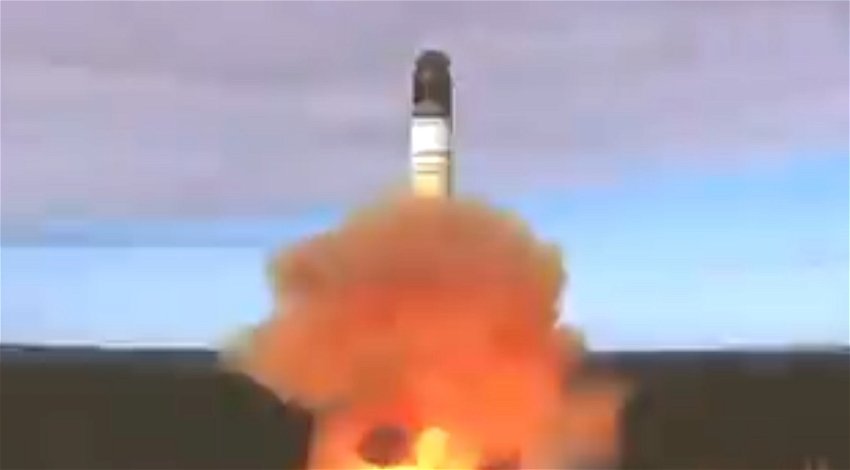 A SENIOR advisor to Russian President Vladimir Putin has reportedly threatened to nuke Britain, warning that they could wipe out the country within minutes.

After carrying out tests of the new RS-28 Sarmat – dubbed the ‘SATAN 2’ – back on Wednesday, April 20, a source close to Putin has reportedly said that Britain could soon be bombed by the ballistic missile if it continues to back Finland’s bid for NATO membership.

According to the Daily Mail, Duma defence committee deputy chairman Aleksey Zhuravlyov has said on Saturday, May 14, that Finland is posed to be attacked by Moscow if they continue with their NATO application.

Finland, who had their electricity supply suspended by Russia after allegedly not paying their bills, are said to be in the process of applying for NATO membership alongside Sweden, which has caused significant international tension.

Zhuravlyov said: “If Finland wants to join this bloc, then our goal is absolutely legitimate – to question the existence of this state. This is logical.

“If the United States threatens our state, it’s good: here is the Sarmat [Satan-2 missile] for you, and there will be nuclear ashes from you if you think that Russia should not exist.

“And Finland says that it is at one with the USA. Well, get in line.

“The Finns, in general, should be grateful to Russia for their statehood, for the fact that Finland exists as a country.”

Russian President Vladimir Putin watched the ‘successful launch’ of the missile back in April and said that the “missile would provide food for thought for those who try to threaten Russia.”

He added that the missile would deter those “who, in the heat of frenzied aggressive rhetoric, are trying to threaten our country.”

“The new complex has the highest tactical and technical characteristics and is capable of overcoming all modern anti-missile defence systems,” Putin said.

He also revealed that Russia intends to deploy the ‘Satan 2’ missiles later this year.

When asked by reporters if Moscow would be rebasing nuclear weapons onto the country’s border with Finland, Zhuravlyov said: “What for? We don’t need to.

“We can hit with a Sarmat from Siberia, and even reach the UK.

“And if we strike from Kaliningrad… the hypersonic’s reaching time is 200 seconds – so go ahead, guys.

“On the Finnish border we will have not strategic weapons, but Kinzhal-class, one that will reach Finland in 20 seconds, or even 10 seconds.”

The renewed interest in attacking Finland comes after Russia has suggested that the country is being helped by the US and Britain in their application for NATO membership.

“The Finns have nothing to share with us,” Zhuravlyov said. “They receive more than 90 per cent gas, timber and much more from us.

“Who needs fighting first of all? The Finns? They are not afraid that Russia is attacking them. Of course, sooner or later the Americans will force them to do so.

“Just as they forced Ukraine to do it, they are trying to force Poland and Romania. And, as practice shows, they succeed.

“It is impossible to say that Finland will join NATO and behave towards us as before – this will not happen. The Americans will incite them to provocations.

“We endure for a long time. But this cannot go on forever.”