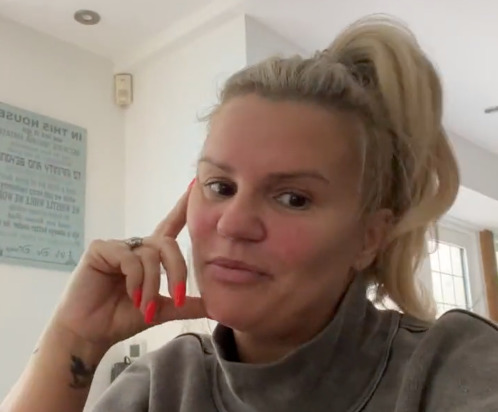 FORMER British pop star Kerry Katona may have to postpone her move to Spain’s Marbella after running into “nightmare” problems renewing her passport.

After announcing that she had her heart set on moving her family to the sunny shores of Spain, Ms Katona has revealed that she “can’t get a passport”.

Speaking in a video post on Instagram, she said: “Anyone else struggling with getting a passport appointment? Can’t get one for love nor money!

“We think we’re going to go to Spain, and live out there.”

“I can’t even get a bl**dy appointment at the Passport Office at all. I’m having a nightmare.

“My passport ran out. I was supposed to go to Jason Vale’s retreat but I thought, I can’t go, because my passport’s run out.

“Try and get an appointment at the Passport Office – can’t get one. So I might have to swim.”

The 41-year-old wrote in her latest OK! Magazine column that she wanted “to wake up to some sunshine every single day” and that she was planning a move to Andalucía’s Marbella.

“We are likely to do another 12 months in the UK,” she wrote.

“My mum will have a base here so whenever I come back that will be where we stay. I went to London for a work meeting last week and it’s a whole day of travelling. You can hop on a plane and be in Marbella in less time. So, that’s our plan. It’s exciting,” she said.

She added: “I want to wake up to some sunshine every single day. It would be a nice life, but I also want to make sure it will be a working life. The children need to realise that they may live there, but they still need to get their homework done and work hard.”

“We will start looking at schools soon to get an idea of what we’re getting into. So much of my work is online now, so it does make sense to think about a new start,” she added.

Recently, Malaga on the Costa del Sol revealed that hotel rooms in the city would be fitted with noise monitors to battle drunken Brits on stag and hen-dos.

Mayor of Malaga, Francisco de la Torre, said that the council were studying “the possibility of installing noise monitors in the hotel rooms” after receiving “an increase in complaints in certain areas of the city, around five a day, around the centre, concerning bachelor parties”.

Torre said: “We are not going to tolerate an uncontrolled city. Whoever comes has to comply with the rules of coexistence of the city.”

Carlos Carrera, president of the Neighborhood Association of the Centre of Malaga, noted that these people party “until the body cannot take it anymore.”

“If you live in a block where there is a tourist flat, you no longer rest. In these flats is where these parties begin and end,” he said.

He added: “Malaga has all the necessary characteristics to attract this Magaluf-type drunken tourism”.

“Places for leisure and terraces have increased, as well as the number of bars, music venues and nightclubs, so they can do what they do on the street,” he continued.

“People come here to do what they want because nothing is going to happen to them. The police do little or nothing, they seem deaf, blind and dumb. This type of tourism is very harmful, benefits very few and drives away quality tourism.”