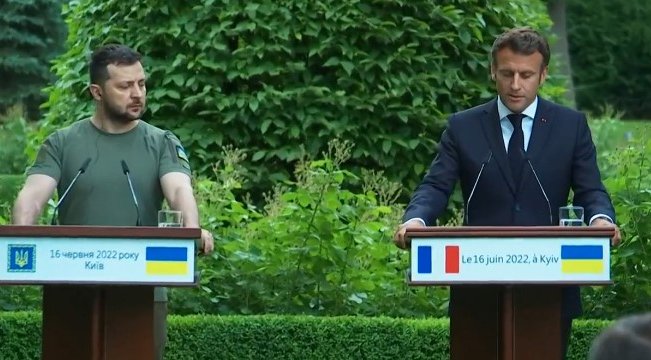 During a meeting with Volodymyr Zelenskyy, European leaders voiced their support for fast-tracking Ukraine’s bid to join the EU.

The leaders of four European nations met with President Volodymyr Zelenskyy in Kyiv today, Thursday, June 16, where they jointly voiced their support for the Ukrainian bid to join the European Union.

Previously, officials had stated that any proposal to join the EU could take several years, or even decades: Today, Macron said ‘immediate’ candidature had his full support, plus that of his counterparts in the other countries, according to standard.co.uk.

In a further move aimed at supplying Ukraine with means of stopping the Russian invasion, Zelenskyy was also promised more heavy weaponry. Macron spoke of supplying another six lorry-mounted artillery guns. France has already provided 12 such items of military hardware.

Speaking at the news conference, the French leader said European leaders were “doing everything so that Ukraine alone can decide its fate”.

Promising his government’s full support, Olaf Schultz pointed out that Ukraine would still have to meet certain criteria for any accession, while adding that along with Moldova, Ukraine should be a part of the European family. He guaranteed continued military and financial help from Germany.

In defending their country from the Russian onslaught, Mario Draghi said the Ukrainians were defending freedom and democracy, values that were important ingredients in the European Union.

“Ukrainians have already earned the right to go down this road and obtain this candidate status”, commented Mr Zelenskyy. A summit is scheduled to take place next week in which leaders will discuss Ukraine’s application to join the EU.