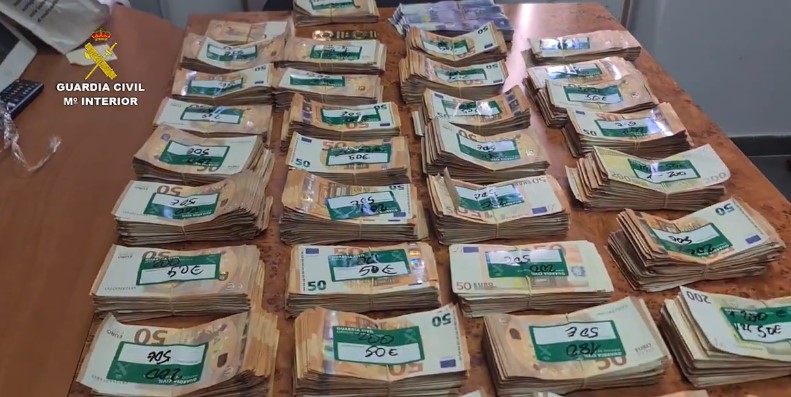 Image of cash seized during raids on a property. Credit: [email protected]

A gang comprising family members using avocado farms and works of art to launder money has been smashed by the Guardia Civil.

As reported by the Guardia Civil in a statement on Saturday, June 25, ‘Operation Persea’ has terminated in the arrest of six members of a family clan. They are suspected of allegedly laundering money obtained from drug trafficking. This money was subsequently used to purchase avocado farms and works of art.

During 13 searches of properties in the Cadiz municipalities of Algeciras and Los Barrios, Sevilla, and the Malaga city of Marbella, cash to the value of €555,270, and 200,000 Swiss francs were seized.

In addition, 52 properties valued at €1,743,646.52 have been preventively blocked, along with 380,000m² of agricultural land dedicated to avocado farming, valued at €1.94 million. These have been judicially confiscated. Likewise, 17 vehicles valued at €332,697.29 have been impounded, and 35 current accounts blocked.

The investigation began in September of last year, when the police detected an increase in assets in the family nucleus of a person investigated and convicted of drug trafficking in previous years. During the operation, a business network was investigated in which more than 35 bank accounts with more than 31,600 movements of all kinds were analyzed.

It was determined that a network of luxury goods stores had been created by the sentimental partner of the suspected network leader. These served the purpose of hiding the benefits of the financial ongoings.

From the analysis of the bank accounts, the Guardia Civil detected a large investment of money that one of its members had made in the cultivation of avocado, with income from drug trafficking. Subsequently, more investments were discovered in hectares of avocado plantations under the control of those involved.

In this way, those involved laundered a large amount of money without raising suspicions, since all the investment made with money from drug trafficking in avocado production was going to multiply in a few years in profits of legal money. This is an identical strategy to that applied by Mexican drug cartels.

Officers determined that the farms that the suspects had bought had small trees planted, so their fruit did not have the size or quality necessary for making sales. It turned out that the suspects bought the harvest from other owners with illicit money, to later sell them to a cooperative, to present an image of being avocado farmers.

The brother of the principal investigated was found to have created shell companies in order to acquire real estate with cash of illicit origin.

During the home searches in Sevilla and Algeciras, officers uncovered works of art, some renowned. There were about 50 items, including paintings, engravings, sculptures and ceramics, gold watches, a gold ingot valued at about €56,000, and cash. These works of art were also used to launder illicit money.

The seized works date from between the 17th century and the present day and are under judicial disposition, awaiting appraisal. It is estimated that their business network over the last 10 years netted the clan a total of €4,154,659.20.