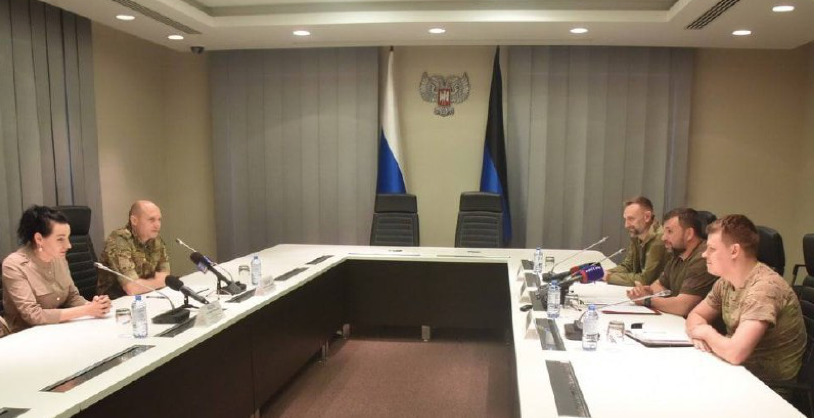 The Donetsk People’s Republic has signed its first memorandum to liberate Kharkiv from Ukraine, as reported on Thursday, July 21.

The announcement on the Donetsk People’s Republic (DPR) and Kharkiv’s memorandum was reported by Denis Pushilin, the Head of the DPR on his official Telegram channel.

“We signed a communiqué with the head of the civil-military administration of Kharkiv Region, Vitaliy Hanchev.”

“We have longstanding and close ties with the Kharkiv region. Our common views have connected us since the composition of the Donetsk-Cherkivorean Republic.”

“We are united by a common history, a common culture and a common struggle against Ukrainian nationalism. ”

“On April 7, 2014, following the Donetsk People’s Republic, the Kharkiv People’s Republic was proclaimed. Further events unfolded in such a way that, unfortunately, the resistance in Kharkiv was suppressed by the superior forces of the illegal authorities in Kyiv.”

“However, Kharkiv’s patriots did not despair. Many of them fought shoulder to shoulder with us for the freedom of the Donetsk People’s Republic and took part in its construction. It is another proof of our unity.”

“Today, the time has come when historical truth and justice will prevail: the liberation of southern Russian lands has begun.”

“Today we are concluding the first agreement between the Donetsk People’s Republic and the liberated lands of Kharkiv. ”

“This agreement will be the beginning of a great work to restore the ties which Ukraine has been trying to destroy for many years. It has tried to destroy it unsuccessfully.”

“I am confident that in the near future Kharkiv will also be liberated.”

“For our part, we are ready to fully support like-minded people on their way back home. Today’s communiqué will help to quickly reintegrate Kharkiv land into the cultural, political and economic space of the Russian world. ”

“We will have to restore the logistical, commercial ties, industrial cooperation between the industrial enterprises.”

“Together we will cope with any challenges, he concluded.”

Video footage of the meeting was shared on Twitter:

The head of the Donetsk People's Republic, Denis Pushilin, and the head of the military-civilian administration of the Kharkiv region, Vitaly Ganchev, signed a communiqué on cooperation. pic.twitter.com/lvuMwPM4D5

Located in the northeast of Ukraine, Kharkiv is the nation’s second largest city.

Syria also officially recognised the independence of the Donetsk and Luhansk People’s Republic, leading to Syria and Ukraine both severing diplomatic ties with each other.