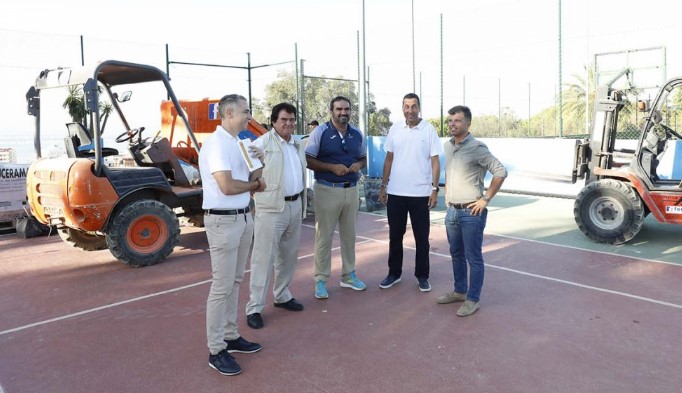 Remodelling work is being carried out on three tennis courts of the Paco Cantos Sports Centre by Marbella Council.

As announced today, Sunday, August 7, on Marbella City Council’s official Twitter profile, remodelling and conditioning work is being carried out on the three tennis courts of the Paco Cantos sports centre in the Malaga municipality.

This is in addition to the works already underway in Pecho de las Cuevas, Francisco Norte, the rugby field, and the petanque courts of Las Chapas. Another fifteen improvements will subsequently be carried out in facilities within this area in the municipality from now until December.

Diego Lopez, and Manuel Cardeña, the councillors of Works and Sports, respectively, visited the beginning of the works today. It is scheduled to last a month and a half and will solve the problem of draining rainwater.

This will allow the practice of this sport “in an optimal and efficient way”, in addition to the possibility of hosting regional and even national competitions in said facilities they commented.

“The work will respond to the demands of the tennis clubs and the municipal school of this discipline”, according to Cardeña. He indicated that the actions are part of the plan for the renovation of sports facilities in the two municipal areas.

“They are going to allow them to be within the homologation of tennis courts with a surface totally different from the existing one. This can allow the hosting of higher level championships, as well as for the practice of wheelchair tennis, and with greater use and easy maintenance”, added Cardeña. He pointed out that the City Council “has worked together with the clubs” to implement these works.

Mr Lopez detailed that in the specific case of these three tennis courts “the existing floor until now absorbed the water slowly, since it did not drain away, and, therefore, it was not going anywhere. When it has been painted year after year, the porous part has been covered and puddles have formed”, he explained.

He announced that: “We are going to opt for another solution, which involves inserting ducts around the walls, with water pipes, so that they go directly to the drains”. This municipal renovation plan: “is lively and dynamic, as it has been working in all sports facilities in the city every time it becomes necessary”, he stressed.

Mr Lopez indicated that in addition to the Paco Cantos Sports Centre: “We are currently working on the second phase of Pecho de las Cuevas, to continue having more square meters of recreation areas. This is along with the one we have prepared for the elderly to practice sports in Las Chapas”.

“In just two or three weeks’ time in this district, and in Francisco Norte, we will have more than 10,000m² of new areas for practicing sports and leisure, as well as in the renovation of lighting in different installations”.

He also pointed out that: “The fifteen very important works that we are going to carry out between now and the end of the year are also aimed at improvements and extensions of facilities, as well as minor maintenance actions in the change of taps or lights, among others”.