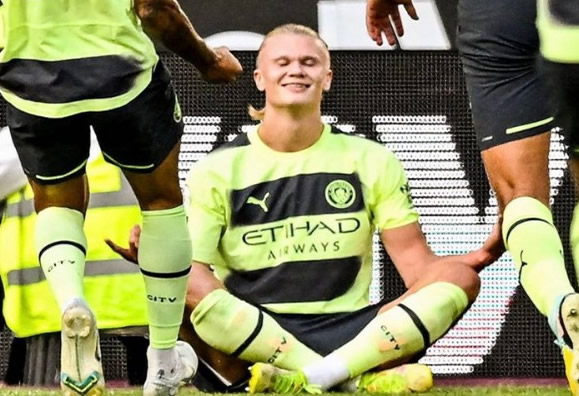 Manchester City coach Pep Guardiola could not have wished for a better to start to the new Premier League season than for his star signing to win the Man of the Match award on his debut. Erling Haaland hit the ground running with two goals against West Ham this afternoon, Sunday, August 7.

Haaland will have already made opposing defenders very nervous with his performance at the London Stadium. As always with City though, it was an all-around polished team effort that won the match. They must surely be odds-on favourites to retain their crown this season with the 22-year-old Norwegian leading their attack.

After being brought down inside the box on 36 minutes by Alphonse Areola, West Ham’s substitute keeper, Haaland calmly slotted the resulting penalty home to open his account.  Areola faced a real baptism of fire after coming on to replace the injured Lukasz Fabianski.

Off the mark in the @premierleague! 🤩#ManCity pic.twitter.com/gXpNP9Djl1

It was game over in the 65th minute when a pinpoint through ball from Kevin DeBryne sent the Norwegian galloping towards the penalty area. Seconds later he dispatched the ball with his left foot beyond the advancing Areola.

This will have been a very ominous sign of things to come for future opposition if these two players can click like that in the season’s opener. The clinical passer and the clinical finisher, a dream combination for the City faithful.

After being a dangerous team at home last season, David Moyes’ side put in a very lacklustre display. Aside from a short spell at the start of the game, they failed to make any sort of impact for the rest of the match. This was a fact made all the more evident by the thousands of empty seats on show long before the final whistle blew.

Kalvin Phillips, Manchester City’s other new signing, was given some minutes of game time by the manager with the game already won when the England star entered the action.