OUTRAGE as Freya the 1,300 pound walrus is EUTHANISED by Norwegian authorities 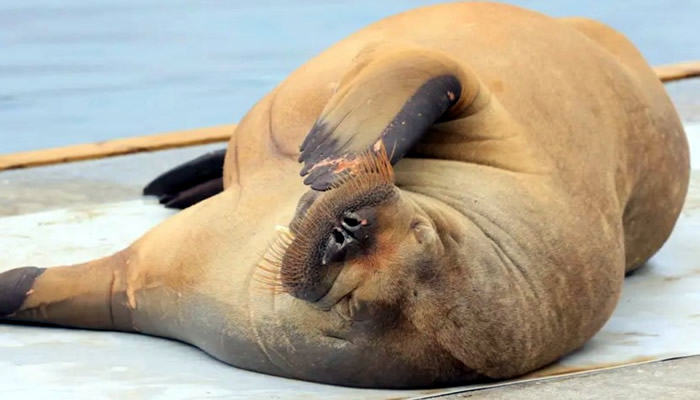 The internet has gone into meltdown with the news that Freya the walrus has been euthanised by the Norwegian authorities.

Freya the walrus, Norway’s popular 1,300-pound attraction was euthanised by Norwegian authorities early on Sunday, August 14. Last Thursday, August 11, the country’s Directorate of Fisheries warned of this possible outcome. They claimed members of the public were getting too close to her and it was not safe.

“Through on-site observations the past week it was made clear that the public has disregarded the current recommendation to keep a clear distance to the walrus. Therefore, the Directorate has concluded, the possibility for potential harm to people was high, and animal welfare was not being maintained”.

The mammal had become an icon in recent years with her playful antics often getting her into the bad books of some mariners. She would clamber aboard vessels, with her weight sometimes causing them damage, or even sinking them.

Norway was not her only playground. Freya had made appearances in Sweden, Denmark, the Netherlands, and the United Kingdom in the last few years. She had become a social media legend as well, with posts about her often going viral, and local wildlife experts falling in love with her.

During her time this summer on Norway’s Oslofjord, the friendly walrus had been a massive attraction for both residents and tourists. Fans would approach her near the water to pose for photos, or even get into the water with her.

The government agency saw this behaviour as endangering the creature’s health, as well as that of those who went close to her. This had been pointed out in the statement last Thursday by Nadia Jdaini, the Directorate of Fisheries’ senior communications advisor.

Speaking with the New York Times last Friday, August 12, Vegard Oen Hatten, a spokesman for the Directorate of Fisheries told them that putting Freya down was a ‘last resort’.

Freya’s death has not been well-received around the world, with incensed users taking to social media to criticise the action taken by the Norwegian authorities.

I’ve just heard . The Norwegians have killed ‘Freya’ the walrus . What is wrong with this world right now ? Savages . I’m so depressed . We do everything we can to highlight the plight of the natural world and this . . . Savages . No better here – fox hunting , Geronimo . . . pic.twitter.com/su49HabpEl

They actually did it. Freya the walrus has been killed by the Directorate of Fisheries in Norway.

Absolutely horrendous that Freya has been killed by the Norwegians. Nature has so little value. I have no words…
Photo of her when we were lucky enough to have her in Northumberland. #FreyaTheWalrus pic.twitter.com/m8UZgpNNQm

Memories of #FreyaTheWalrus – a very special creature that spent a month here in Shetland last winter.

MURDERED today by the @fiskeridir Directorate of Fisheries in #Norway "based on an overall assessment of the continued threat to human safety."