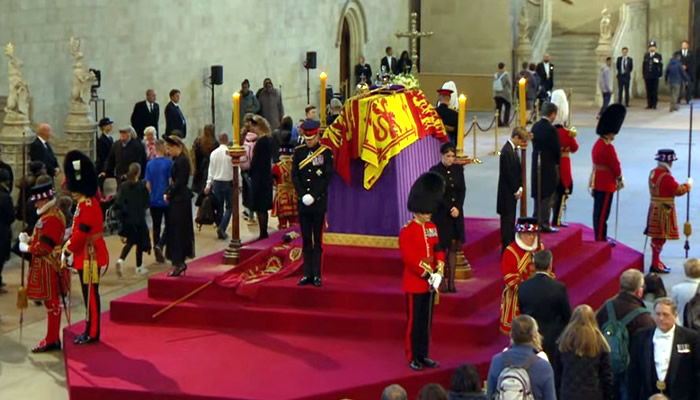 Why Queen Elizabeth’s coffin is lead-lined is a point of much speculation but there is according to scientists a simple reason that goes back many centuries.

According to experts spoken to by the Washington Post on Wednesday, September 21 this is a tradition that goes back many centuries.

According to Julie Anne Taddeo, a Research Professor of History at the University of Maryland the reason is quite practical. She said: “As a material in coffins, lead helps keep out moisture and preserve the body for longer and prevent smells and toxins from a dead body escaping.

“Her coffin was on display for many days and made a long journey to its final resting place.”

Although modern technology enables better preservation of the corpse, the tradition is still maintained along with the rest of the ceremonial activities.

Mike Parker Pearson, a Professor at University College London’s Institute of Archaeology says the use of lead is a long tradition. For example, the embalmed corpse of King Edward I, who died in 1307, was “found in 1774 to be well preserved in his marble sarcophagus” in Westminster Abbey.

He said that it is thought that the practice of using lead was probably adopted around the time of Edward’s death, although it could have come later.

He continued saying that earlier kings were not embalmed. William the Conqueror, who died in 1087, was apparently so badly decayed that his bloated abdomen exploded. Priests had tried to stuff his body into “a stone coffin that proved too small for his bulk.”

“Mourners supposedly ran for the door to escape the putrid stench.”

An account at the time by according to Orderic Vitalis, a Benedictine monk said William’s “swollen bowels burst, and an intolerable stench assailed the nostrils of the by-standers and the whole crow.,”

With the coffin lead-lined, many commentators and spectators noted that it was a heavy weight for the pallbearers to carry. Unlike the use of lead, carrying the coffin is a more recent alteration to the funeral of kings and queens.

The change came after the horses pulling Queen Victoria’s catafalque bolted having been spooked by something nearby. That nearly led to her coffin being spilt into the street, resulting in the change to the manner in which the coffin is moved.

Pall bearing has also had its moments with Winston Churchill’s lead-lined coffin almost dropped after it nearly slipped off shoulders off some of the shoulders of the men carrying it. They paused to take a breather and nearly dropped the coffin in the process.

At the time the pallbearers at the back, the pushers, saved the day by managing to stop it from falling. In an interview with the BBC, Lincoln Perkins said he uttered aloud to the corpse: “Don’t worry, sir, we’ll look after you.”

Ancient Egyptians are said to have used similar techniques to preserve their high-ranking officials. However, they were buried with all their worldly possessions whereas the Queen is said to have been buried with just her wedding ring of Welsh Gold and a pair of pearl earrings.

So there you have it, the reason why Queen Elizabeth’s coffin is lead lined although it no doubt serves other purposes like preventing the use of scanners and the like to view what is in the coffin.