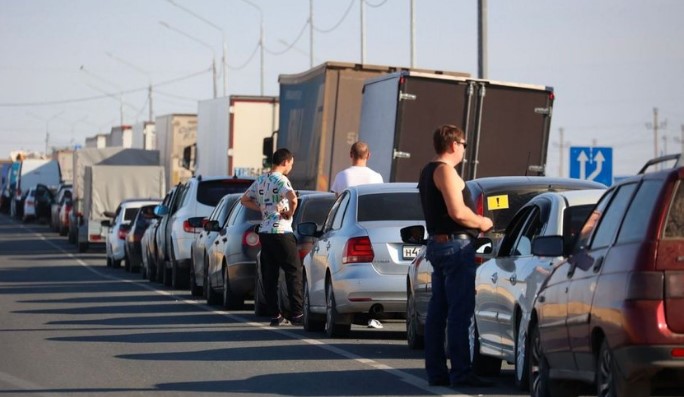 Image of traffic jam at the Russian border with Kazakhstan. Credit: [email protected]_news_ua

The Kremlin Press Secretary Dmitry Peskov claimed that reports of huge traffic jams at the Russian border with Kazakhstan were exaggerated.

The border service of Kazakhstan reported on Friday, September 23, that due to the number of people leaving Russia, huge traffic jams have formed at the border. Zarina Doguzova, the head of the Federal Tourism Agency confirmed that men who did not receive a summons could leave the country.

As reported on the website of the border service of the National Security Committee of Kazakhstan, the number of citizens wishing to leave the territory of the Russian Federation has increased on the Kazakh-Russian border.

“30 established automobile checkpoints are operating normally. Due to the increase in the flow of people and vehicles, four of them are experiencing congestion. The situation is under special control”. the ministry wrote.

🚗 Make benefit for special mobilisation operations — A record number of cars were counted at Kazakhstan's border with Russia tonight. pic.twitter.com/oGUA37VtBJ

Zarina Doguzova, the head of Rostourism, explained on her Telegram channel that she had received many questions about tourist trips during the period of partial mobilisation, both abroad and within the country.

“Based on the information that we have at the moment, if you have not received a summons, then you can go on trips. We do not have information about any restrictive regulations at the federal level”, she said.

Doguzova continued: “Also, on the advice of the head of the State Duma Defence Committee, for clarifications, you can contact the military registration and enlistment office to which you are assigned”.

On September 21, Russian President Vladimir Putin announced the start of partial mobilisation in the Russian Federation. As Defense Minister Sergei Shoigu clarified, the call will affect 300,000 reservists, which is just over 1 per cent of Russia’s total mobilisation resource.

Dmitry Peskov, the press secretary of the President of Russia, told reporters that he considers the information about the hype at airports and on the Russian border to be very exaggerated.

Commenting on the ‘closure of the borders’ in  Tatarstan and the Kursk Oblast, Peskov cited the eighth paragraph of the presidential decree on partial mobilisation. It states: “The highest officials of the constituent entities of the Russian Federation need to ensure the conscription of citizens for military service on mobilisation”, as reported by gazeta.ru.