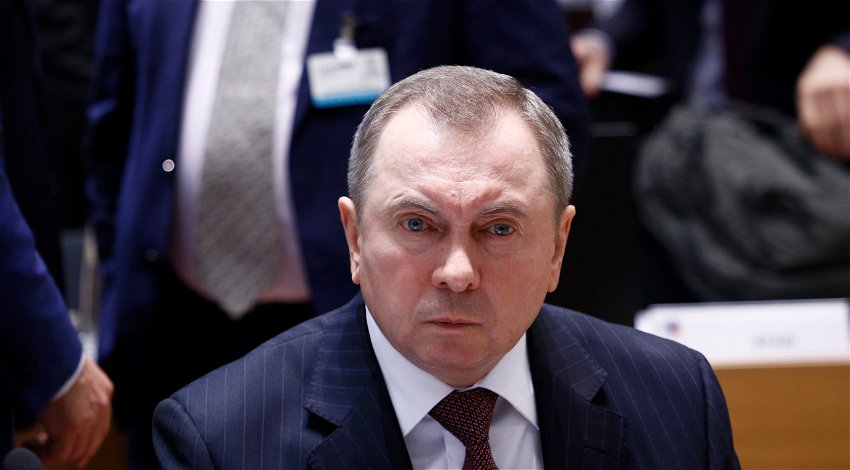 Belarus Foreign Minister Vladimir Makei died suddenly a few days before he was due to visit Poland with one diplomat claiming maybe he ‘knew too much’.

Apart from a brief message of condolence to his family from President Alexandr Lukashenko, there has still not been any official explanation from Minsk about the ‘sudden death’ of Belarus Foreign Minister Vladimir Makei.

He died on Saturday, November 26, and unofficial reports in the Belarusian media have said it was the result of a heart attack. It has been claimed by numerous sources who knew Makei that he was fit and healthy and was never at risk of suffering a heart attack, even at 64 years of age.

Sources insist he was not known to be suffering from any ongoing illnesses. A video recorded on a Belarusian military cargo plane en route to Yerevan in Armenia just last week showed the minister seemingly in very good health.

Vladimir Makei's last flight in a military transport plane to Yerevan. Lukashenko flew like a king in an airplane with a golden bed and a golden toilet. #Belarus pic.twitter.com/VESCeg6n0N

Leonid Nevzlin, the exiled businessman who is a critic of Vladimir Putin claimed to have information from sources ‘close to the Russian special services’. He insisted that Makei ‘died as a result of poisoning developed in an FSB special laboratory’. He cited his sources as informing him that: ‘The clinical picture in such cases corresponds to death from stroke or heart failure’.

‘When he suddenly got a heart condition, he did not go to doctors as he had not experienced such problems before and did not give any importance to the pain’, he added.

‘It is very easy to poison a man so that everyone thinks he has died of natural causes. It is enough to disrupt the balance of enzymes in his body – the substances that ensure all processes without exception, from fluttering eyelashes to breathing’, Nevzlin explained, quoting a Russian toxicologist.

He continued: ‘The death of Makei, essentially the second most important man in the state, has caused panic in Belarusian nomenklatura circles. But dictator Lukashenko is the most shaken. He has ordered the replacement of his cooks, servants and guards’.

‘Lukashenko’s children have been given extra security. The dictator does not trust anyone’, he concluded. The Belarusian dictator now will be thinking Putin has organised ‘a magnificent funeral’ for him, added Nevzlin.

Meanwhile, General SVR, the anonymous dissident Telegram Channel, suggested on Monday 28, that Makei’s alleged assassination was: ‘planned, prepared, and implemented on the personal initiative of the President of Russia, Vladimir Putin’.

‘Nobody is really hiding the fact that this is murder from Lukashenko. The action was demonstrative and aimed at disrupting Lukashenko’s separate negotiations with the West and China’, it wrote.

Their post added:’Makei ‘assured his Western counterparts, and not without success, that Lukashenko was actually held hostage by Putin and forced to commit ‘unpopular’ acts under pressure from the Russian president and in order to preserve the sovereignty of the Republic of Belarus’.

Another high-profile individual voicing his comments on the situation was 59-year-old Lev Shlosberg. ‘It is very difficult, almost impossible, to believe in the natural nature of the causes of the death of Vladimir Makei’, said the Russian human rights activist and opposition politician.

Aleksey Dzermant, the Belarusian political scientist was adamant that foul play was not the cause of Makei’s death. ‘There are no facts that would give reason to say so. Moreover, he had a sufficient degree of protection and security. The causes of his death are natural’.

A similar explanation was provided by Sergei Markov, the Pro-Kremlin analyst. Reacting to the news that Lukashenko had removed all of his service personnel and cooks, he said: ‘Sometimes it needs to be done. A good reason to do it now’.

‘The Belarusian authorities have rejected versions of the poisoning of Foreign Minister Makei. They said that he started having heart problems. But the sudden death of a rather young, 64-year-old, prominent politician created suspicions of murder’, he added, as reported by dailymail.co.uk.

Mystery surrounds the sudden death of Belarus Foreign Minister Vladimir Makei, who died ‘suddenly’ on Saturday, November 26. There has still not been any official statement made by the Belarusian government in Minsk or the country’s state news agency about his as-yet unexplained death.

The continued silence has only fuelled speculation of outside interference, especially when one colleague described the minister as having been ‘healthy’. During an exclusive interview with NEXTA, Pavel Latushka, a former Belarus diplomat, suggested that maybe Makei ‘knew too much’.

“Makei knew more about Lukashenko than any other person in the country. He knew who visited him, with whom Lukashenko could drink – a large amount of information. There are many mysterious circumstances”, Latushka told the news outlet.

❗️In an exclusive interview with NEXTA, former #Belarusian Minister and diplomat @PavelLatushka commented on the death of Foreign Minister #Makei. According to him, Makei knew too much about #Lukashenko and his plans – more than anyone else. pic.twitter.com/LMSNDhdSQT

Latushka revealed that the deceased minister had been scheduled to attend the OSCE Ministerial Council that is being held in Poland next week. Calling the timing of his death ‘suspect’, he suggested that maybe Makei had planned to ‘bring something important with him’ on his trip to meet with European ministers.

Belarusian ministers had previously experienced attempts to prevent them from travelling to Poland explained the former ambassador to Poland. Ahead of that trip, he was supposed to meet Sergei Lavrov, the Russian foreign minister today, Monday 28, as reported by express.co.uk.

“There was a confidential memo in the Belarusian government that analysed these incidents and made the conclusion that behind all these attempts to provoke a termination of these visits was Russia and the FSB”, he added.

A post on the Russian Telegram channel Brief said: “Makei had extremely bad relations with the KGB leadership”. He had become an ‘irritant’ to the Kremlin claimed another Pro-Russian channel.

Makei had allegedly been involved in possible peace talks with Ukraine according to several posts on Telegram channels. He was a known opponent of any potential involvement by Belarus in Putin’s conflict, and regularly voiced his insistence that attacks would never be launched from Belarusian territory by the Russian military.

Earlier this week, Makei was last seen in public at a conference- that Vladimir Putin also attended – in Yerevan, the capital of Armenia. He died just a few days after it was predicted by a leading US foreign policy think tank that Lukashenko would be provoked into deploying his troops in Ukraine by Russian military intelligence. Something the minister would have surely been deeply opposed to.