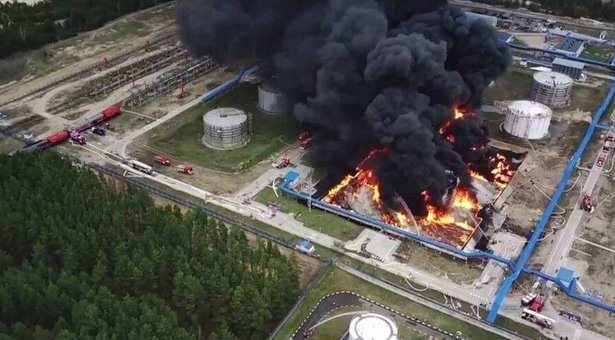 10:13 (December 6) – Footage has emerged of the tanker fire at the Kursk airfield in Russia.

Today another Russian airbase was caught in fire. As local authorities say an oil tanker was on fire at Kusk airfield after the drone attack. pic.twitter.com/OFzP4oGb0U

09:49 (December 6) – According to airport authorities the tanks targeted by Ukraine drones were empty at the time.

Footage shown online would suggest that the tanks were not empty but that they contained an unspecified amount of oil.

Russian authorities have sought to downplay the strike with no information provided on the extent of the damage or what effect the fire will have on the ability of the oil storage facility to function normally.

08:15 (December 6) – A drone attack on a Russian airfield in the Kursk region has set an oil tanker alight, however, no casualties were reported.

The attack on Tuesday. December 6 is said to have occurred close to the Russian border with Ukraine.

Roman Starovoit, the territory’s governor wrote on the Telegram messaging app according to Russian news site, The Moscow Times.

Footage published online shows a large fire accompanied by the sounds of fire engines and police at the airport in Kursk. According to local authorities the fire is under control although no details were provided with regard to the extent of the damage to the airport or its facilities.

The news comes on the same day that Russian oil prices hit the $60 ceiling on Russian oil imposed by the European Union and the G7 countries.

#Russia: This morning two Russian cities were woken by explosions – the Ukrainian army fired on targets in #Belgorod and #Kursk, however neither were successfully hit according to preliminary information. pic.twitter.com/AeEIDI4g7l

He added that the attacks had damaged critical infrastructure and residential buildings but that no casualties had been reported. This was confirmed by the Moscow-appointed official in the region Vladimir Rogov, who said that six missiles had targeted Ukrainian army installations.

Claims were also made that Ukraine had targeted the Zaporizhzhia nuclear plant, which Russian Foreign Ministry spokesperson Maria Zakharova said it will not hand over to Ukraine or any third party.

Rafael Grossi, head of the UN nuclear watchdog the International Atomic Energy Agency (IAEA), had said last week he hoped to reach an agreement on securing the Zaporizhzhia plant with Russia and Ukraine.

Ukrainian drone attacks continue to be effective this time set an oil tanker in the Kursk airport on fire.