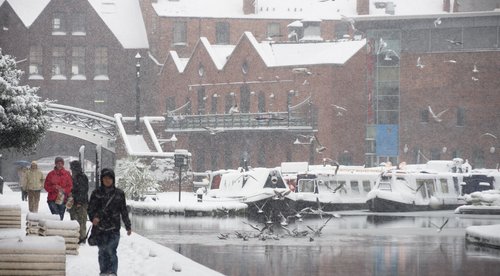 The arctic cold weather that hit the UK this week is set to last between five and seven more days according to the Met Office.

According to the Met Office on Wednesday, December 7 temperatures could drop below freezing in many parts of the country barely rising above zero during the warmest parts of the day.

Snow and ice have been forecast for all but central parts of the country and the southeast for tomorrow and Friday, with Scotland to be worst affected with a combination of snow and ice.

The Met Office has asked people to take the appropriate precautions to remain warm and safe, whether at home or out working or shopping.

In London, Mayor Siddiq Khan has implemented the severe weather protocol which will among other measures, see shelter made available for the city’s homeless. A number of events have also been cancelled as a result of the weather, which could see temperatures drop by as much as ten degrees.

With severe cold weather on the way British Gas has warned that its services will be under extreme pressure, with as many as 70,000 call outs expected this week alone.

A Met Office spokesperson Grahame Madge told the Mail online that: “We are in this pattern for seven days at least.

“We could see it continue for a while longer, there’s uncertainty in the evolution and how long it will last.

“However, the pattern for the next seven days is that it will remain cold, and we will see double digit minus figures overnight in areas that are prone to frosts and areas where there is lying snow.”

He added that: “There is no expectation of widespread heavy snow, but wintry showers could be expected during the cold spell, particularly on higher ground and by the coast.”

The expectation is that the weather will not be as cold as December 2010, when widespread snow was seen throughout the UK.

The UK Health and Security Agency (UKHSA) has recommended that the main living area be kept at 18C, which will be warm enough to avoid dangerous conditions whilst keeping the heating bill down. They also advice wearing sensible warm clothes indoors if needed, whist they recommend not turning the heating off elsewhere in the house but maintaining it around 10 to 12 degrees to avoid damp and damage to the property.

Although the arctic cold weather is set to last only between five and seven days, there is a possibility of further cold weather to come. If you need to service your boiler now’s the time to do it, as it to stock up on foods and beverages that will help to keep you warm.