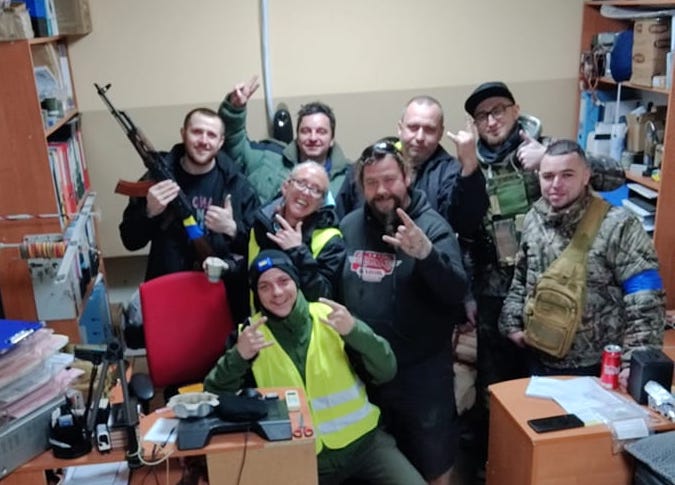 “MISSION ACCOMPLISHED” read the post from Project 4 All, a non-profit organisation of volunteers helping the homeless on the streets of Costa Blanca, who travelled into war-torn Ukraine to deliver donations from Benidorm and beyond.

On Wednesday, March 9, the team set off from Spain on their charitable trip. One van and a people carrier first headed towards Romania, where they picked up a trailer and a car. While another van set off from the UK.

James Findlay-Craig (from the British Legion), Michael Triac and Konstantin Tsepordey were in the people carrier which unfortunately broke down in Austria, while Jacqui Birch and Danni Bowler set off in the car to Poland.

To say their journeys were eventful would be an understatement.

However, it was the “J crew” Jonny Hellraizer, Jo Hollingworth and James Coyne who had the most perilous trip as they headed for the Ukrainian border to deliver goods collected by the charity for the Ukrainian people.

After reaching “no man’s land” between the Romanian EU / Nato border and the Ukrainian war zone border on Sunday, March 13, the Project 4 All team were greeted by Ukrainian border guards.

The plan was to unload the vans and return to the safety of the EU and for the goods to be distributed to the cities of Ukraine most in need by the Ukrainian army, however, the van sent to collect the donations was stuck further down the border and couldn’t get to them.

It was at that point the border guards asked the team: “How would you feel we feel about driving around 60 km across the border with a military and police escort to deliver directly to those who desperately need your donations?”


“Well, what could we say…” Jo said as they headed out on their dangerous journey.

In the early hours of Monday, Monday 14, the J crew – travelling alongside Andrei Murgulescu and Marres Anthonio Florin from Romanian foods Ltd – drove into a war-torn country towards a collection and distribution point run by soldiers and territorial guards, while flanked by armed escorts wielding Kalashnikovs, during the nighttime curfew in a country under martial law!

The brave team and the soldiers unloaded the donations, kindly provided by the people of Costa Blanca, while air raid sirens broke through the silence of the night, eventually forcing them into a warehouse and ultimately to bunker down for the night.

Soldiers welcomed the volunteers with coffee, tea, food and warmth until it was safe to carry on with their aid mission.

“At one point we asked for a glass of Jack Daniels to break the ice,” Jo said.

“And, playing the perfect hosts, one of the soldiers produced a magnum of champagne, offering to open it to celebrate our arrival.”

Regaling the team with prideful stories of their country, the soldiers said they had a desire to fight and “crush the invading force destroying their country,” Jo retold.

“They told us of their sisters, mothers and friends who refused to leave and who stood side by side with their male comrades taking up arms and protecting the vulnerable,” she said.

The Project 4 All team were thanked by the young soldiers for the donations and were happy to hear stories from their journey and of the work the charity does.

Jo told Euro Weekly News that “it was only made possible by the generosity of the British community over here [in Spain]. We are so lucky!”

When the sirens stopped and it was safe to continue, the team continued to unload the vans and all the donations, separating them into pallets of food, clothes and toiletries for easier distribution in the Ukrainian cities.

Jo explained that “we were given a shopping list of essential things needed in the country so that’s what we brought with us, the soldiers were extremely happy. They have sent us another shopping list for our return!”

Once the unload operation was complete, the soldiers escorted the charity crew back to the border as air sirens began to blare again.

Jo noted that the most heartbreaking moment was during this drive back when they saw “people walking for miles to reach the safety of the European border.”

Then at the border, their hearts sank as they were greeted by the “chilling sound of children and babies screaming and crying as they were coaxed from their father’s arms as the men stayed to fight.”

“Families were being torn apart before our eyes, possibly forever, which sent shivers down our spines and brought lumps to our throats,” Jo said.

Despite the success of the trip, the charity is not done there and is planning more donation runs to Ukraine. And they could use your help.

Jo told EWN: “We really want to raise some more money. We’ve got enough donations here in Benidorm to do another trip.

If you would like to find out more about Project 4 All or see how you can help, then please visit their Facebook page by clicking the link here.