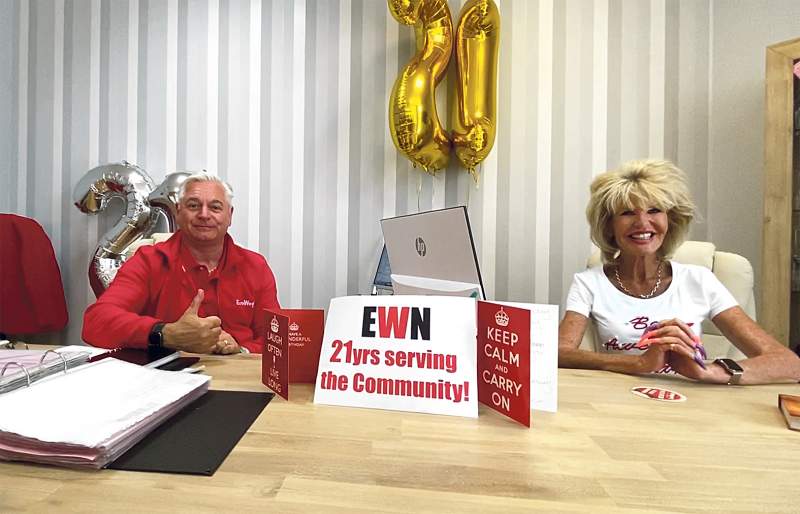 The Euro Weekly News, run by Steven and Michel Euesden, has been built into the biggest and leading expat newspaper in Spain – exceeding the distribution numbers of all other English newspapers.

As sales director of the Euro Weekly News, Steven Euesden has made a resounding success of the paper, bringing in fantastic advertisers from the Costa del Sol, Costa Blanca North, Costa Blanca South, Axarquia, Almeria and Mallorca. These advertisers are specially selected to be of use to the Brits who have made Spain their adopted home, as well as the Spanish public and businesses.

The team at the Euro Weekly News prides itself on being ‘in your face’. Just like the British brand Ronseal’s advertising campaign, ‘we do what we say on the tin’. They have the most readers, the largest distribution, the best articles, the sharpest designers and the biggest, most loyal, client base. What better platform for Spanish and British businesses to advertise with?

Steven Euesden says the proof is in the pudding: “We do not say we are number one, our front page does. Never before, even in the boom times, have we had so many advertisers wanting to advertise. Why? Because they need to and because they know that we are the one marketing format that works.”

“We make no apologies for the front page as we have always said our place is to help the expat businesses and we feel that we are doing this,” he says. The cost-benefit ratio is more relevant than ever before. Business owners, managers, service providers and retailers need to be confident they will get a return from their advertising expenditure, and this is where Steven Euesden has pitched his advertising sales’ packages.

“We are offering affordable marketing campaigns to the people who want to survive these turbulent times and who wish to be here when the cycle moves forward,” says Steven. “People cannot afford to be left behind,” Steven added.

“We are not like others – diversifying because times are getting tougher – we are strengthening our foothold. We are concentrating purely on what we do best – giving our readers what they want, thus achieving results for the advertisers.”

The Euro Weekly News has been immensely proud to break records when distribution increased to more than 100,000 copies every week. A letter from EWN printers Artes Graficas del Mediterraneo, SL read: “We would like to extend our congratulations to EWN Media Group for extending their total weekly circulation to a staggering 103,000 copies. EWN is most definitely the largest English-language newspaper we print, and this increase is especially impressive given the tough economic climate that is unfortunately causing many companies to shrink rather than expand.”

“In our opinion this reflects the commitment by these publishers to servicing their readership, and their determination to rise above downward trends. We have enjoyed a great professional relationship with EWN and are confident that we will continue to do so for the years ahead.”