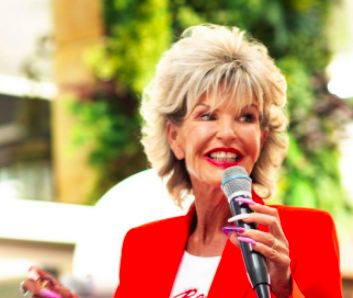 Michel Euesden has emphasised the importance of her role as a wife and a mother. She has asserted that two of the three best things which have happened in her life have been the birth of her son Benjamin George Wickham, and meeting her husband, Steven Euesden.

Michel met Steven, the man whom she says was to “change (her) entire existence” on April 22 1996. She says “he made me feel complete for the first time in my life and I knew that the final, elusive piece that I didn’t know was missing had at last been added to the jigsaw.”

She does not hold back in expressing her love for her husband, whom she describes as her “soulmate”. It is a love which has only grown throughout their marriage. Despite working, living and sleeping together 24/7 everyday of their lives, Michel says that they still love, laugh and respect each other, never tiring of each other’s company. “We’re as sociable as they come but all we really need is love and each other.”

Nine years later, another man was to enter her life, in the form of God. This happened on the 1st of June 2005 and she describes Him as a “major influence” in her life. She “allowed him to take control” which has enabled her to “enjoy an inner peace that for years (she) had been denied and searched for in vain.” Although this has certainly not meant that she sacrificed her ability to be a strong leader and overseer of the Euro Weekly News production.

The lessons that she has learnt from reconnecting with her religious and spiritual self, she tries to pass on to her son, Benjamin, whom she describes as “quite a colourful chappy to say the least”.  Amongst these lessons, she includes learning to love herself, no matter what the world may say about her. Michel shares, “if you are true to your inner self you can face yourself in the mirror and you can sleep at night. When everything that you do is carried out with goodness in your heart, there is nothing more that can be asked of you.”

She has also translated the close family connection she shares with her son and husband to The Euro Weekly News media, overseeing the production of the news source and communication with sources and advertisers with her husband Steven by her side, whilst her son Benjamin is the National Sales Executive at Euro Weekly News. As well as her direct relations, in line with her Christian principles of community, that “each one should use whatever gift he has received to serve others”, Michel views those who work to produce over 580,667 copies of the paper each month, not as her “workers” but as her “extended family”.